An Electromagnet at Work!

What was Uncle Albert talking about?

In our novel, The Time and Space of Uncle Albert, Gedankan helped Uncle Albert learn that when she was chasing the light beam in the space shuttle, she couldn't catch up to it because the faster she went in the shuttle, the heavier the shuttle became. A homework pass goes to the student who could name this important scientific law. Here is a good explanation, with a familiar equation...

Unifying mass and energy The most famous work of Einstein’s life also dates from 1905 (a busy year for him), when he applied the ideas of his relativity paper to come up with the equation E=mc2 that represents the relationship between mass (m) and energy (E).

In a nutshell, Einstein found that as an object approached the speed of light, c, the mass of the object increased. The object goes faster, but it also gets heavier. If it were actually able to move at c, the object’s mass and energy would both be infinite. A heavier object is harder to speed up, so it’s impossible to ever actually get the particle up to a speed of c.


Did you get it? Who would have thought that you would learn about Einstein's Special Relativity in 4th grade!

Here is a link to some images of this beautiful work. How does the artist create condensation?

This is a video... it's not in english, but it's cool to see.
STEMscopes
Debunk your misconceptions of scientists:
Dragonfly: Scientist Videos

Part I: Just for Kids - What is soil?
Part II: Amazing, Wonderful Soil
Part III: Soil Beneath You Feet

Use your explore learning log in to play gizmos online. Here is the link to the website. 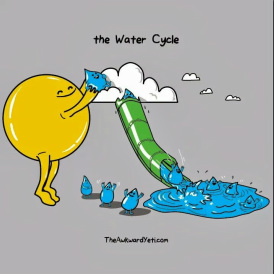 The Water Cycle in Motion Video